Link to the Application Form! 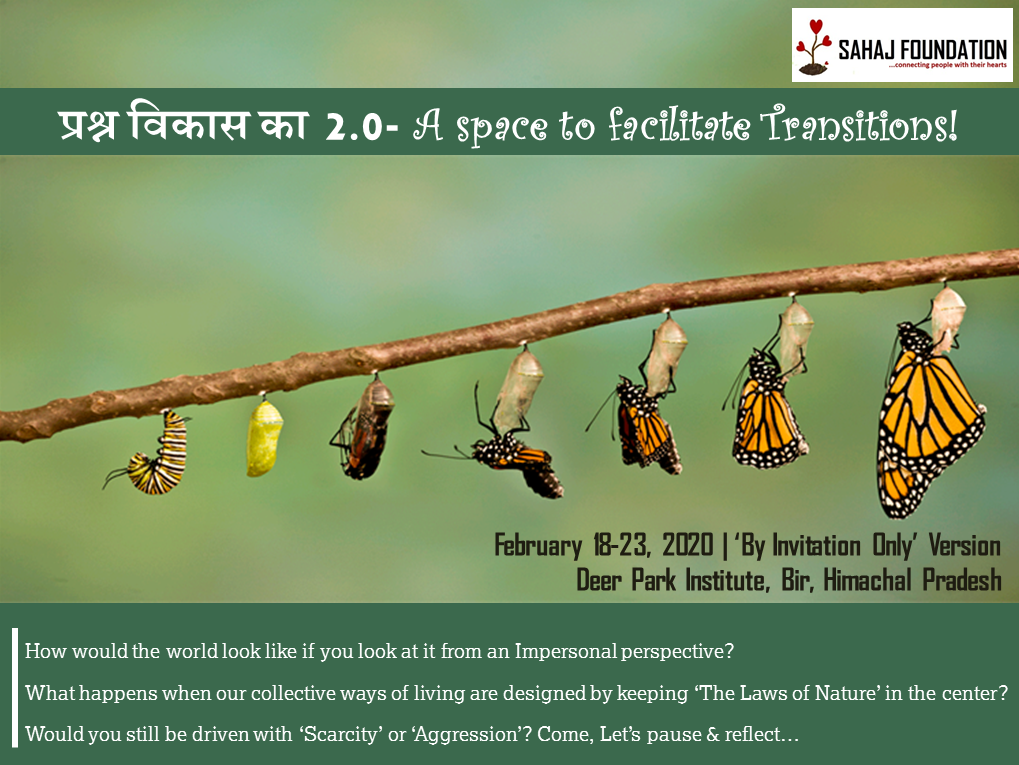 The times are changing. We no longer live in a world that is going to be primarily governed by systems based on greed. We are very gradually, in a very subtle way, transitioning into an era that is going to be governed by higher states of consciousness. An era in which humans beings shall not consider each other as separate individuals, rather they shall see each other as a collective whole. An era in which we shall not be driven by our selfish desires, rather we shall become capable of putting others first. An era that shall not consider the world made up of machines, rather it shall consider the world as a very much interconnected living system.

And, very few of us are at the forefront if this revolution. All of us have the potential to develop this capability of breaking through the older ways to lead to the emergence of the new ones. The most we need today is to create spaces wherein we can nurture this potential and thrive so as to facilitate the transition.

‘प्रश्न विकास का 2.0- A space to facilitate Transitions!’ is a workshop very carefully designed wherein an attempt would be made to create a space that can facilitate the inspired ones to go deep within, connect with their own selves and the world around, and evolve to a state of mind that promises to lead humanity into a connected future. The workshop is offered to the individuals who have previously attended ‘प्रश्न विकास का- A Dialogue on Rural Development’ and who very well understand the advantages and disadvantages of the present Governments, Markets and Self-reliance based systems.

This workshop shall be a huge leap forward in terms of making the following four transitions:

1. From Mechanistic thinking to Life-based systems thinking
This is about a shift in perspective. A perspective that no longer considers living beings, including humans, animals and plants, as machines; rather, it sees them as a web of relationships, networks and patterns, deeply interconnected and thriving as a whole. This change in our narrative shall fundamentally change the way we live on our planet.

2. From Scarcity to Abundance
The present economic system is fundamentally established on Scarcity, with an assumption that scarcity provides ‘value’ to our medium of exchange i.e. Currency. This inbuilt scarcity based system is sucking our life energy from within. It is making all of us to work hard endlessly, consume mindlessly and play out our negative tendencies (Greed, Fear, Hatred, Anger etc) unnecessarily. This system needs to be transformed into a system that respects abundance, promotes abundance and thrives on positive human traits such as Compassion, Empathy and Love; a system that prefers collective happiness over personal profit.

3. From accumulation to sharing
At societal level, too much accumulation is a sign of insecurity, whereas sharing is a sign of trust. This shift represents a change in the way we live with each other as a society.

4. From Fear to Trust
This is a shift at the level of Mind. This is a shift that a seeker on this journey has to lead for himself/herself. This shift shall open the way for above shifts to happen.

The workshop shall include various experiential sessions, simulations, meditation, field visits and documentaries. It shall be organized in a very spiritual environment of Deer Park Institute in Bir, Himachal Pradesh. By the end of the workshop, the participants shall be able to look at their world with a different perspective, understand its inter-connectedness, find ways to lead their own lives as per the laws of nature and inspire everyone in the whole process of living.

Deer Park Institute is a centre for study of classical Indian wisdom traditions. Established in March 2006 on the campus of a former Buddhist monastic institute, it is a project under Siddhartha's Intent Society. The core vision of the Institute is to re-create the spirit of Nalanda, a great university of ancient India in which all traditions of Buddhism were studied and practiced, alongside other schools of classical Indian philosophy, arts and sciences. More information on the institute can be found on its website.

Note: Interested Participants shall have to submit a non-refundable deposit of Rs 3,000 each in order to secure their space. The remaining contribution may be submitted during the course of the workshop. 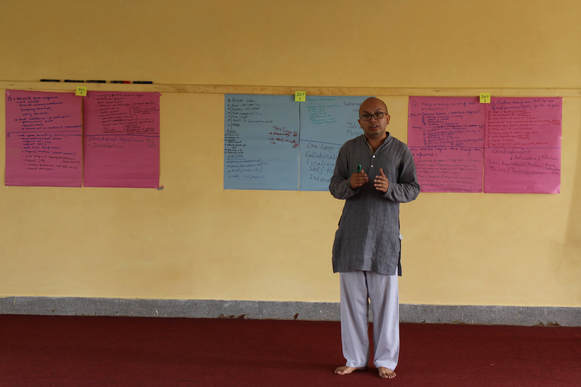 Ashish graduated from Indian Institute of Technology (IIT), Roorkee in the field of Electrical Engineering in 2009. Post studies, he pursued his corporate career for a few years before deciding to move on to his passion to work with rural communities. Since then, Ashish has lived in the villages of Gujarat and Himachal Pradesh and worked for many rural projects related to Education and Livelihood sector. Before founding Sahaj Foundation in 2013, he also worked with Indian Institute of Technology (IIT) Mandi to help set up their ‘Centre for Innovative Technologies in Himalayan Region’.

Presently, Ashish lives a simple and peaceful life in Bir village situated in Kangra District of Himachal Pradesh. He has chosen Education as his primary medium of service while he continues to explore more on organic farming and holistic healing with an aim to simplify his lifestyle and benefit the society as much as possible.

Ashish’s journey of living with rural populace while understanding their needs took him deep within. Through his explorations and interactions, he realized that the concept of development needs rethinking so as to grasp the basics first before thinking about projects or policies. At personal level, Ashish has found simple living with minimum outer dependence for products of daily needs preferable to his lifestyle. In the whole process, he also realized that his life is more about purifying his inner self by serving people with great love in smaller ways than solving big issues or establishing large enterprises.
For more information, write to Ashish Arora (sahajfoundationinfo@gmail.com) or call him on +91 88948 93083