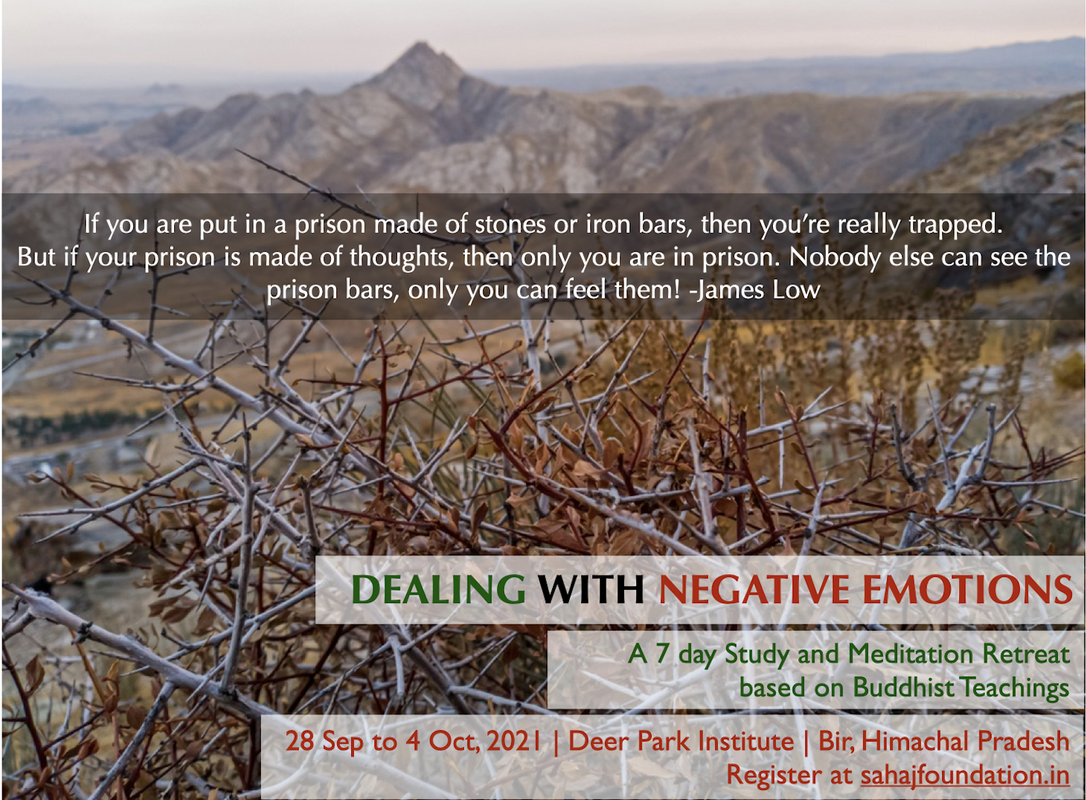 A horse suddenly came galloping quickly down the road. It seemed as though the man had somewhere important to go.

Another man, who was standing alongside the road, shouted, “Where are you going?” and the man on the horse, replied,

Are we being driven by our horse or we are driving our horse? Do our emotions overpower us or do we have full control in our hands to deal with them?

In spite of completely understanding that our negative emotions such as anger, attachment, jealousy, hatred, greed, lust etc do not contribute to our happiness, we repeatedly tend to fall into their trap, realizing only afterwards that it wasn’t necessary to get swayed away with them or there could have been better ways to deal with them.

This 7 day retreat aims to bring light on this fundamental question through analysing what lies inside each one of us, by digging deeper into the question of how we develop the skill to face our negative emotions, rather than avoiding them, and then transforming them for our own happiness!

WHAT ARE NEGATIVE STATES OF MIND?

They have two main characteristics (which the positive ones necessarily lack) and these are indicated by two commonly used synonyms: “disturbing emotions” and “delusions”.

Disturbing: Even though we can see that anger is disturbing to oneself – just look at an angry person: they’re out of their mind! – We fiercely live in denial of it; or we deflect it, so determined are we to believe that the external catalyst is the main problem.

Delusional: The other characteristic that these unhappy states of mind possess is that they’re delusional. We’d be offended if someone accuses us of that, but that’s exactly what Buddha is saying. The extent to which our minds are caught up in attachment, anger and the rest is the extent to which we are not in touch with reality. He’s saying that we’re all delusional; it’s just a question of degree. In other words, anger, attachment and the rest are concepts, wrong concepts. It seems like a joke to say that these powerful emotions are based in thoughts, but that’s because we only notice them when they roar up to the surface as emotion.

WHY IS IT DIFFICULT TO DEAL WITH NEGATIVE EMOTIONS?

Our finding it hard to change from the negative to the positive emotions shows what our minds are familiar with at the moment. Right now, according to Buddha, our minds are thoroughly habituated with the negative, all the nonsense made up by the ego, by attachment, anger, jealousy, pride and the rest, which causes us suffering, to experience life in a deluded, distorted, fearful way, and to harm others.

A person using Buddha’s methods is, essentially, attempting to develop his/her positive potential and lessen the negative. Buddha says this potential is innate; that love, wisdom, kindness, generosity, etc. are at the core of our being and, in fact, define us; and that negativity, although present in our minds and lives, does not define us, is not innate, and thus can be removed.

The most practical reason for wanting to do this job is, first of all, because it’ll make us happier – and we know we want to be happy. And second, it’ll make it easier to live with other people.

WHAT PRIMARY TOOLS WILL BE USED IN THE RETREAT?

In this retreat, our primary tools will be study, reflect, meditate and practice.

STUDY: Understanding these various negative emotions so as to develop more self awareness of the same.

REFLECT: Connecting the study to the real life experiences so as to internalize them as per the individual. Also it will help us to keep a non-judgemental attitude towards our negative emotions.

MEDITATE: The Tibetan word for meditation is gom, which translates as “to familiarize,” or “to habituate.” In this sense, meditation is a psychological process of familiarizing, habituating, oneself with the positive and with what is real.

PRACTICE: After gaining an understanding and familiarizing the self with the negative states of mind, the retreat will create a space for all the seekers to face/transform their negative emotions through practice. The process will also enable the seekers to prepare to continue their practice in their daily lives.
“The key job, then, is to develop the skill to look inside, to be introspective, in a clear and disciplined way, so that we’re then qualified to do the actual job of changing our emotions, of distinguishing between the positive and negative.”

GROUND RULES FOR THE RETREAT

Venue of the retreat shall be Deer Park Institute in Bir, District Kangra of Himachal Pradesh. The venue is easily accessible via road, rail and air.

The retreat shall be organized on Gift Economy basis by Sahaj Foundation (in collaboration with Deer Park Institute), which means that the participants would be encouraged to contribute towards the facilitation of the retreat as per their willingness by the end of the retreat.
However, all participants would be required to pay for accommodation and food expenses as per the actuals charged by Deer Park Institute.
For more information about the retreat, write to Ashish Kumar (sahajfoundationinfo@gmail.com) or call him on +91 88948 93083